Our mission is to help Kids with Autism Spectrum disorder Thrive so they may be given every opportunity to reach their full potential.

We believe that these children flourish when they are in the presence of horses.

Our moto around the barn is that special needs kiddos and ponies go good together!

ASK HOW WE CAN HELP YOUR CHILD NOW

Is your child struggling to cope?
Are you??

Has your child been diagnosed with ASD (Autism Spectrum Disorder)?
Or do you suspect your child may be exhibiting symptoms but have not been readily diagnosed?

As a parent you have probably tried numerous interventions and modifications for your child in hopes that he or she can live a life with less strife and greater ability to function in normal settings.

Dealing with ASD is not a quick fix, of that you are probably keenly aware by now.

It does take considerable effort, focus and determination on your part to ensure your child receives the best care and effective therapeutics to have some lasting effect and measurable improvement in your child’s behaviors.

Parents share with us the frustration, disappointment and sometimes futility that comes with the territory of navigating the medical and psycho-social treatment options available.


By now you must have realized that treating your child is a multi-modal approach which includes addressing the academic, environmental, medical, psycho-social, behavioral and nutritional needs.

To compliment other modalities you may already be employing, we offer specialized programs at the barn to address emotional, behavioral and physical issues. No matter how long since symptoms appeared or the official diagnosis, Equine Facilitated Psychotherapy and Learning Programs can prove beneficial to a child with mild to severe functional impairments.

With children on the spectrum, we often find them retreating into their inner world as they struggle with interacting with peers and adults. Horses provide a non-threatening, non judgmental bridge to help unlock these kids’ brains to help them acknowledge and process their emotional states so they can better relate to the external world. 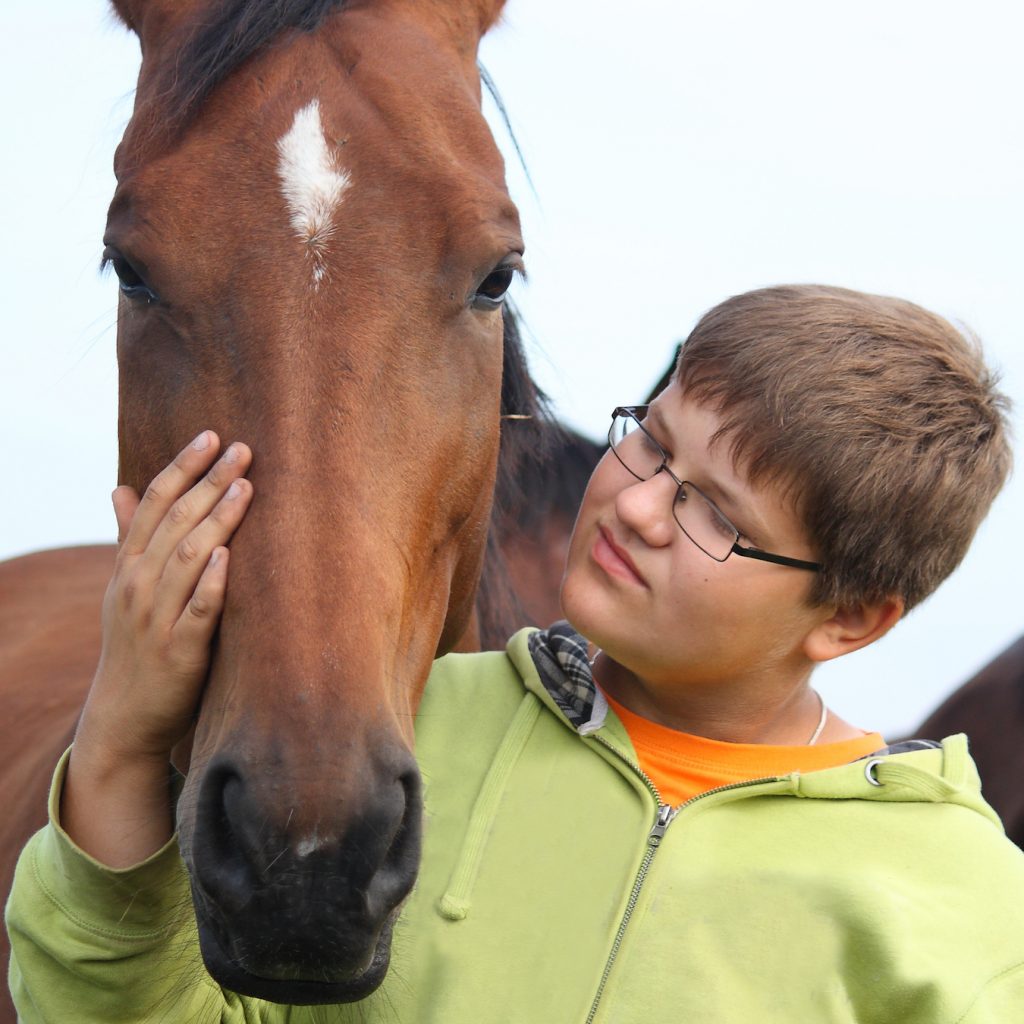 The benefits of our unique Equine Enrichment Program include:

Most people by now have heard about the therapeutic effects horses have on those with physical limitations and developmental delays.

The freedom and joy present in a wheelchair bound child or adult sitting riding and moving fluidly on a horse is heartwarming and obviously life changing for the rider.

This is also the case with special needs children on the spectrum of autism and other neurodevelopmental disorders.

The myriad of stimulation affected by being around horses causes integration of sound, sight and spacial orientation which leads to marked improvement in balance, coordination and boundary awareness.

Scientific evidence asserts that therapeutic horseback riding (THR) leads to increases in oxytocin levels in the brain and body – the feel good hormone- that is associated with bonding and feelings of satisfaction and safety.

There also has been research done on how the rhythm of the horse moving when being ridden creates a vibration that aligns with the rider which then potentially activates the sympathetic nervous system. This part of the autonomic nervous system is known as the flight or fight switch and is responsible for involuntary regulations of heart rate, blood pressure, body temperature and digestion.

Many ASD kids have digestive and gut issues and have higher cortisol levels which indicates a lower stress threshhold, so calming the sympathetic nervous system is key to regulating their bodily reactions.

Typically ASD kids don’t get social cues and thus are not enthusiastic about interacting with people and all the pressure that entails.

For this reason many are drawn to animals to find connection because they feel less threatened and can experience unconditional acceptance when given the opportunity to bond with an animal.

Horses are especially good at invoking this response because their sensitivity and ability to communicate non verbally can allow an ASD child to let down his or her guard and learn to open up. Trust develops followed by an ability to rely on intuition to guide them on making right choices that lead to successful outcomes.

By practicing working on the ground with horses and then graduating to being confident in the saddle, a child can transfer this new found sense of mastery, self satisfaction and willingness to engage to everyday life events resulting in deeper connections with those around them.

Give your child the best chance at living a life full of potential, curiosity and deep connections.

Let us know today how we may work together with you and your child to achieve your targeted goals.

Start now on your child's path towards success!